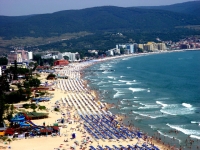 Sunny Beach is a major seaside resort on the Black Sea coast of Bulgaria, located approximately 35 km north of Burgas. It is the biggest and most popular holiday resort of the country, and is home to over 800 hotels with more than 300 000 beds. There are also 130 restaurants and numerous live music bars, pubs, nightclubs, discos, cafes. It has been undergoing continuous expansion for many years. In recent years almost the whole hotel base has been renovated and several new luxurious hotels have been built as well as many apartment complexes.

Sunny Beach has a very small permanent population, but during the summer the resort is home to many thousands of tourists. The main strip of high-rise hotels backing onto the beach is several kilometers long and extends along a wide bay between Sveti Vlas and Nessebar.

The resort's construction began back in in 1958. Construction works began at a site, where two old wells supplying Nessebar with water in ancient times and during the Middle Ages, had been located.

The climate of the area is Mediterranean, explaining Sunny Beach's popularity with tourists since the Soviet Union existed. Since that time the resort's popularity has grown among German holidaymakers, who add to the already large numbers of Bulgarian and Russian visitors. More recently, Sunny Beach has begun to attract the attention of the British, Irish, Scandinavian, for which it is a more affordable alternative to the established Mediterranean resorts.

Attractions for tourists include the sunning at the beach, water sports, nightlife, and the nearby historical site of Nessebar. There are two new Aqua Parks near the resort. Sunny Beach is mainly popular amongst young people. The Golden Orpheus International Festival of Popular Song, the Decade of Symphonic Music, part of the International Folklore Festival, fashion-shows and various beach competitions are held there. In 2008, the VIth Stranski-Kaischew Surface Science Workshop, a prestigious triennial international conference sponsored by the Bulgarian Academy of Sciences and named in honor of two prominent Bulgarian scientists of the 20th century, was held in Sunny Beach.